It’s a new country so time to football. My ability to buy tickets to games in South America definitely hasn’t improved! After struggling to find out games/times of the Chilean league (I later found out they generally only release fixtures 5 days prior) I chose the match for game number two on the world football tour. Universidad de Chile vs Colo Colo.  I spent a lot of time online trying to figure out how to get tickets. This left me more confused than a baby in a topless bar. Eventually I found out (or thought I found out) that I could head to the stadium a couple days prior to buy a ticket. So I jumped in a cab and made a beeline for the stadium but returned empty-handed. I did, however, manage to meet some Universided de Chile fans.

To sum them up they were a little aggressive, had been drinking and while the wheels were still turning I think the hamster was dead.  They had jerseys lying on the ground and anyone arriving was politely (J) asked to throw some money on the jerseys.  Sort of like buskers with no talent at all.  I wasn’t questioning this logic and quickly donated to the cause, whatever that might be.

I headed home to attempt to purchase them online.  I finally did and as it was a Sunday 1230pm kick off we thought it might be a good family game – so I bought 4 tickets, not realising they were in the away (Colo Colo) section. It had said “Visita” and I think in my haste I had read it as “Vista”, like they were seats with a nice view!  After sifting through a number of online forums I quickly realised this wasn’t the game to be taking my 3 beautiful girls to.  As it was featuring the two biggest clubs in Chile in the biggest clash (El Superclasico), a little bit of violence may be on the menu and it definitely wouldn’t help being in the away section.  I made the call that unfortunately I had bought 3 tickets too many and the girls football experience would have to wait until another day. 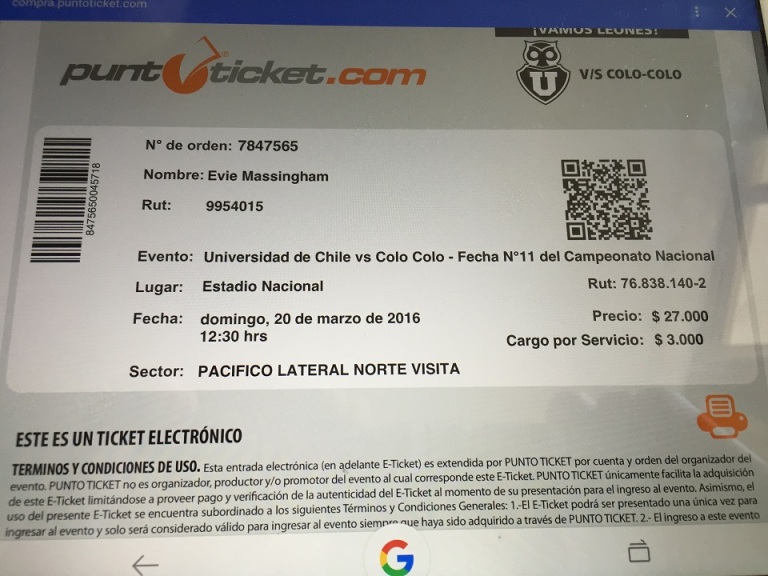 Game day I dressed in my usual football attire.  Let’s just say I was more neutral than Switzerland.  I had a rough idea how to get to the game (about 4.5km away), I could walk or train.   I started walking and quickly came across about 15 Universidad fans in their blue shirts, looking a little hard-core but obviously heading to the game.  I thought I’d follow them…at a safe distance behind.  A police car lurked around as well. Two minutes later 10 police on dirt bikes came round the corner and pinned the group up against the wall.  As they searched them I decided they may not the best group to follow.  The police presence on the streets was extremely heavy the closer I got to the game.

Adrenalin was pumping just trying to fit in with the mob on the way to the game and hoping no one questioned my Colo Colo ticket. Bungers went off in the street, police pulled up and randomly (or I thought it was) put people in the paddy wagon. I made it to the stadium safely and went to enter.  My ticket and passport were thoroughly checked and then it became a question of entering the away section.  The lady at the gate looked at my ticket, went off and spoke to someone else before returning and ushered me into a different gate.  I quickly realised what had happened.  All Colo Colo fans need to be in the seats by a certain time (as they arrive together to avoid problems).  I had arrived later and I think she realised the safer option for me was just to be in with the Universidad fans in the main section.  No problem for me, I was now a Universidad de Chile fan.  I took my seat in the full stadium with the stunning Andes in the background.

The stadium itself has a bit of history.  Estadio Nacional Julio Martinez Pradanos is the national stadium with a capacity of about 49,000. In 1973 it was used as a detention centre (the largest prison facility in Chile, housing about 40,000 prisoners) when the country underwent the military led coup which resulted in Pinochet ruling the country the year after.  41 people were said to have lost their lives here during this time. Nowadays a section of seats is always left empty to remember those who lost their lives.

Back to the game.  The less said about it the better. A pretty terrible 0-0 draw.

I safely made the walk home, full of adrenalin as I cruised past police armoured trucks and happy with the decision to leave the girls at home for this one.  An enjoyable day out nonetheless. 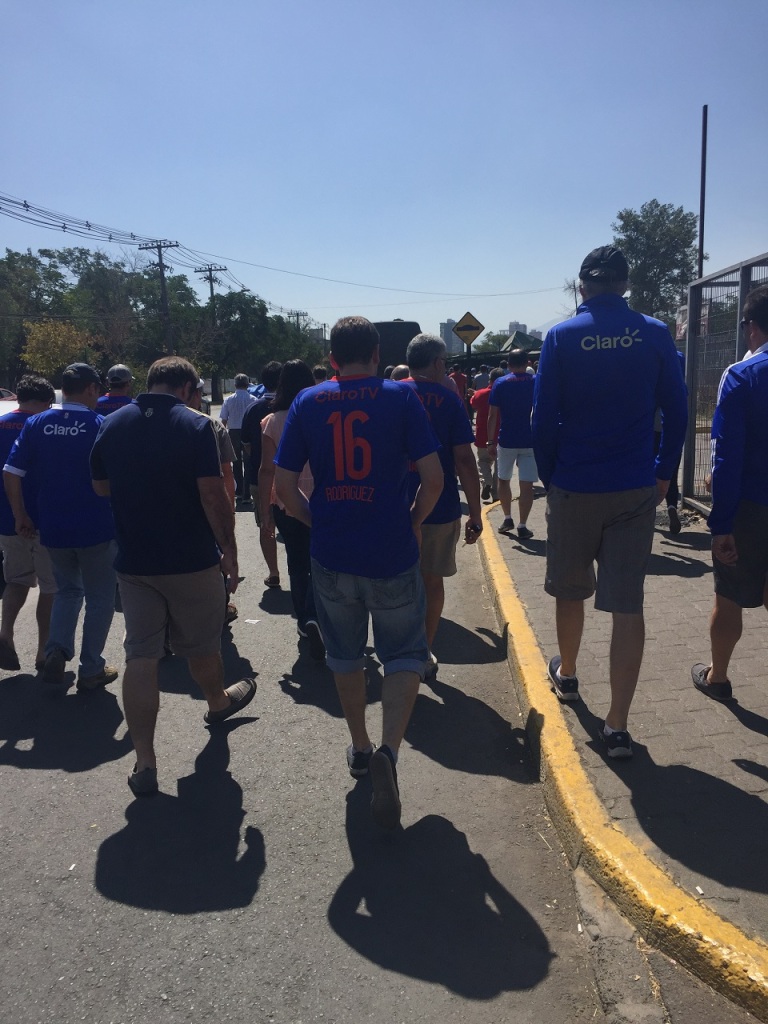 Match Food & Drinks – 6/10 (combo may have been $6 but was also served at just the right temperature…for Salmonella!)