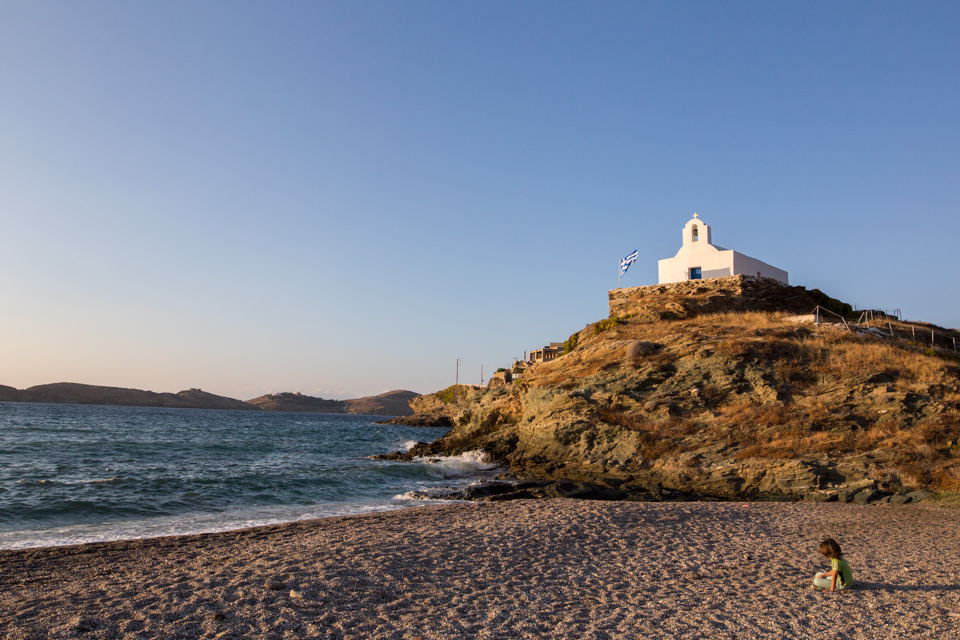 Yassou, Kalispera, Efharisto, Parakalo, Galatouboureko, Skordalia, Avgolemono, Klitheraki. This is a decent chunk of my Greek vocabulary and at least half of the above are food.  So I was pretty excited to be getting my Greek on. I was probably more looking forward to dropping my favourite Greek dad jokes. What do you call a Greek cleaner? – Domestos. What do you call a Greek skydiver? – Con Descending… I could go on. It is one of our favourite places in the world and we were happy to be back.  We have an obvious connection to Greece (Erica’s maiden name was Zagoridis after all), with her dad Wally’s family coming from Greece.  Ez did about 41 years of Greek school growing up (maybe a slight exaggeration there) so she could say the words listed above with just a little more class than me…but not a lot else. Anyway we were prepared. We had 4 weeks planned here visiting about 5-6 new islands, off the main tourist trail a little. Skopelos, Kea (Tzia), Kythnos, Milos, Kimolos and Paros. Our first stop was Skopelos.

Piper and Evie – Once again dad is embarrassing us.  He continually tries to talk like the Greek dad in My Big Fat Greek Wedding.  If he says “from the Greek word” one more time, I’m outta here.

We started by having one of those perfect travel days.  Our early morning flight from Italy arrived on the nearby Northern Sporades island of Skiathos.  It was due to arrive at 9:55am with the two ferries to Skopelos leaving at 1030am or 430pm.  We would have loved to catch the 1030am but didn’t like our chances. Even with our flight being late we piled into George’s cab.  The 4 of us were ready to go when he invited another couple in (yes in a standard sedan, with luggage). Pipes sat upfront with me while I lost Ez and Evie somewhere in the backseat with our luggage. We just went with it but needless to say I kept a close eye on the open boot as we headed to the port (for falling luggage, not people).  The ferry was pulling in a few minutes late so we still had time to buy our tickets, jump on and head to Skopelos. Our car and villa were both ready early so by midday we were in the pool, perfection. This would be our last week  with Wally and Irene who arrived early afternoon. It was stunning. A beautiful villa with a pool, a view out over the ocean and a huge fir tree to shade the terrace.

Skopelos is a small island with about 4500 inhabitants. We spent a week there living the high life. Hours in the pool, time on the beach, eating some of the best Greek food in years. Skopelos is also known for being the ‘Mamma Mia’ island. So we visited ‘that church on top of the hill’ at the end of the movie.

I have to admit Mamma Mia was one of my least favourite movies of all time.  I’d put that in the same category as The English Patient, Grease 2, Debbie Does Dallas 3 and Dumb and Dumberer (the prequel). Nonetheless I still lead the charge heading up to the church hoping we wouldn’t run into Meryl or Pierce (the daughter maybe?).

We ate well here. I may have added on a kilo or two in Portokalopita. This is a divine orange cake which we purchased daily (no seriously we did). I ate more cake than a Biggest Loser reunion and became  friends with the baker by the end of our week. Irene became mother-in-law of the century when she went up and asked for the recipe to bring back home.  I ate cake while the girls entertained the locals dancing onstage up in the town square. 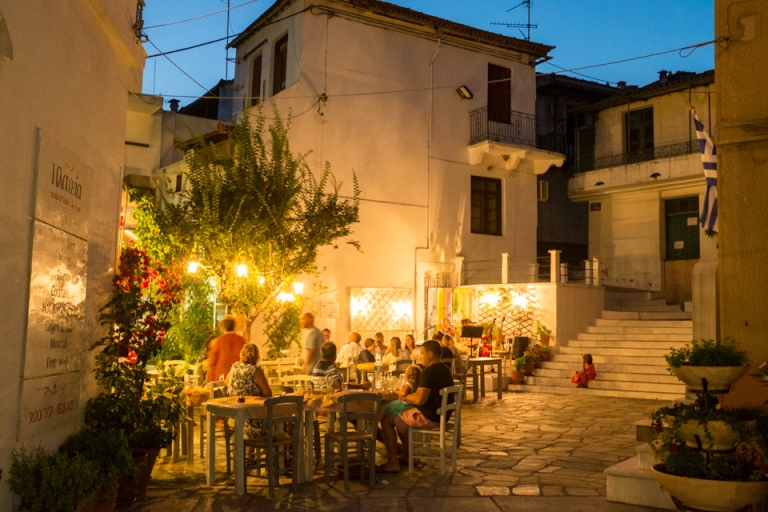 It was also a marked step forward for Piper in the pool.  She went from being the girl who didn’t like to put her head under to diving for rocks on the bottom of the pool, cranking out some backstroke and dancing underwater. Afternoons by the pool were magical.  The standard daily 30 degrees was tempered by a nice ocean breeze which meant low humidity and you weren’t sweating like Sonia Kruger at a multi-cultural festival. 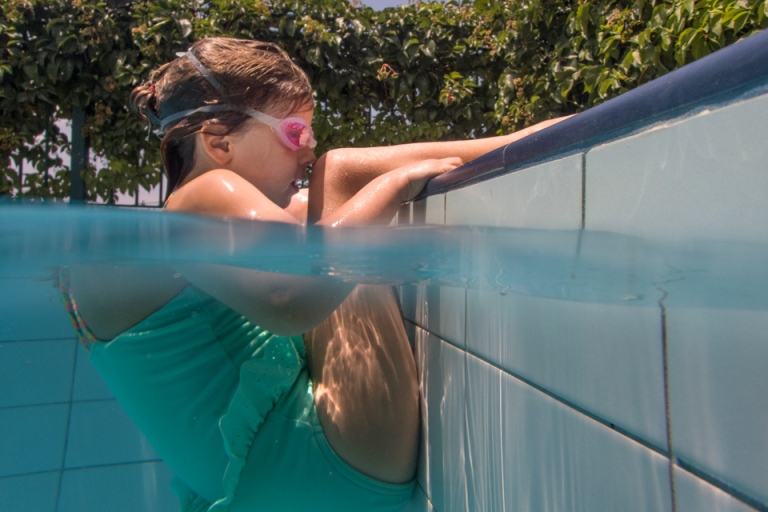 Piper and Evie – Mum and dad are addicted to this orange cake.  If it’s 2pm dad starts scratching himself, sniffing, getting all paranoid until he gets his cake.  He needs counselling.

We farewelled Wally and Irene who were heading back to Oz having spent about 3 weeks with us. The girls (and us) have loved having them with us over the last few weeks and they will be missed.   Prior to them leaving we managed to have a little pre-birthday party for Piper with toasted marshmallows, cake and presents. We have to go back to being full time parents now!

Piper and Evie – Back to plain cereal for breakfast, no salt in our food and having to throw a tantrum to get an ice cream.  Life was so much easier with Nonna and Papou around. 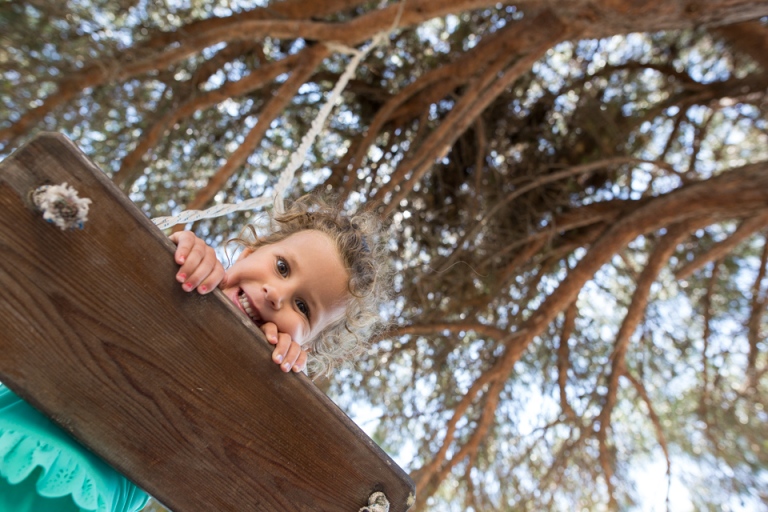 From Skopelos we needed to make our way down south to the island of Kea in the Cyclades.  A ferry, flight, drive in our new car (2001 Ford Focus with AM radio) and ferry later we arrived on Kea and made our way into the pool in our next villa. Here we would spend the week with our friends from Oz (currently living in London) The Goodmans – Ben, Airlie, Lynn (Ben’s mum) and their beautiful boys William (3 ½) and little Sebastian (Sebby) who was 10 months.  Another chilled island, population 2500, that is frequented by the Athens crowd on a weekend.

We checked out the island beaches, hiked in 35 degree midday heat looking for an ancient stone lion – that day I was sweating more than Pauline Hanson in a kebab shop. We kicked back around the pool and even got our Greek on with some evening BBQ’s round the pool (think plate smashing and women with moustaches).  This place was a kids dream – pool, cubby house, trampoline, toys, movies…and other kids. It was also the scene for Piper’s 5th birthday party (her actual birthday was a few days later when we were by ourselves).  We decorated the cubby house, made invitations (for the 9 of us), made a piñata, played pass the parcel and musical statues, had fairy bread and a princess cake.  I think we did pretty well for being on a Greek island. At the end it was like waiting for Juan Antonio Samaranch to deliver his Olympic verdict.  Piper came through with the goods dubbing it “the best birthday ever”.

Piper – Oh god bless their cotton socks, they tried so hard.  Cheapskate homemade piñata’s, sprinkles not 100’s and 1000’s on the fairy bread, dodgy face painting, a pass the parcel where everyone got the same prize.  Musical statues…give me strength.  I said at the end it was the best ever as I just couldn’t break their hearts.  Tip – they’ll need to do better next year if they want to stay in the family, just kidding, they did do pretty well!

We spent the rest of the week with our friends visiting more of Kea’s beaches, drinking ‘fancy drinks’, eating plenty of Greek food and watching the sunset from our patio. We had dinner one night at a restaurant on the beach – our table was on the sand and the kids could play barefoot in the water. We farewelled the Goodmans and looked forward to catching up again in London in a few weeks time 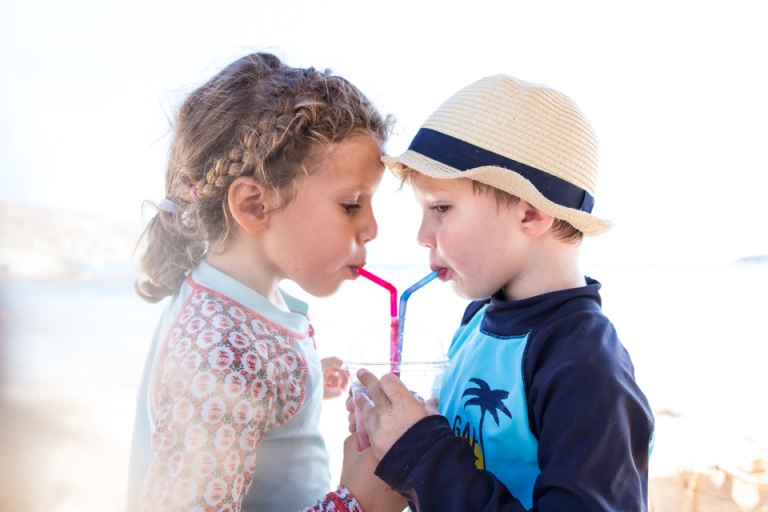 Ez and Evie had an interesting conversation once our friends departed

Evie- I’m going to miss Grammy Lynn. She will be lonely when she goes back to Australia

Ez- It’s ok, she has a daughter Rebecca and son Simon there

Evie-Is it Simon from the Wiggles?

Evie-What colour t-shirt does he wear then? 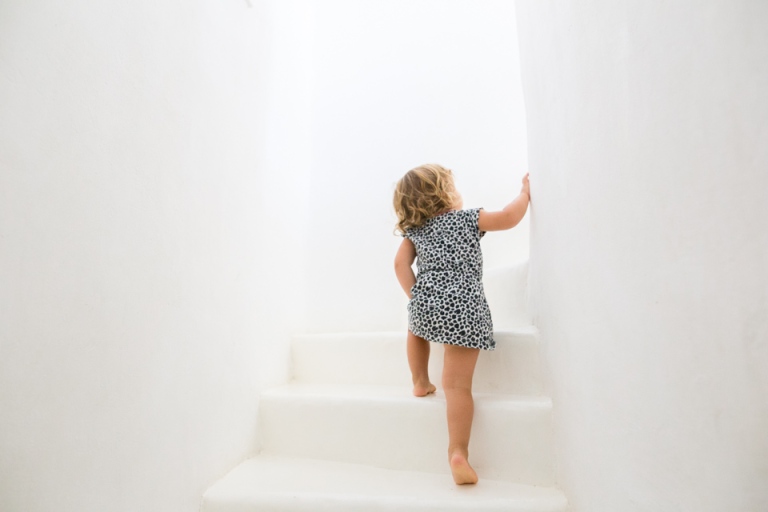 That’s our first two islands, part two of our Greek adventure will continue in the next post.  I’ve got to get back to the pool.

Latest reason for Evie crying – She cried because she didn’t win snakes and ladders.  That wouldn’t be something so unusual to cry about the only problem was that she wasn’t actually playing.

Also I think the sun is getting to Ez.  She’s been a little weird lately.  While at the beach she said ‘look, my feet look like a dessert and the sand looks like crushed honeycomb’. Moments later she was floating on her back in the water and calmly stated ‘this is as close as possible to how it would feel to be in a womb’.

One thought on “Heaven and HELLAS”